All that glitters is not Gold!

Hey y'all!!  Cat here, and thought I'd post more to the ole blog for awhile, like I used to,  instead of just at GKD release time!  Hope I dont bore ya too much!  :D

Wellll, I couldnt resist the craze right now, Foiling!  I did for the longest and then I would get card requests asking for some gold or silver or some kind of shininess on it and so I caved!  And about the same time I decided to look more into the machines for it, I also heard someone say the Anna Griffin Minc machine was 50% off on HSN AND on 2 Flex pays...I could not resist!  Plus it came with all kinds of fun stuff too.  And, short story is, I am having a blast with it!  Mucho fun!

And THEN Gina K comes out with...did you see them yet?  Color Me Cards and Color me Panels!!  They are sooo fun to color and to top it off, they can be foiled too!  Here is one of the panels I did: 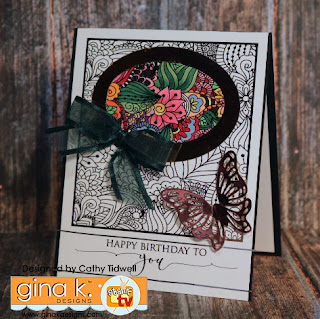 I did a bit of spotlighting!  and the butterfly is also die cut and foiled...the whole thing , the coloring area is foiled and then also the oval frame is foiled!  It's sooo very hard to get a good picture of its shininess! 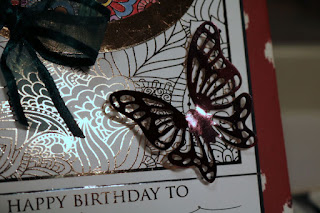 I tried to here though.  The butterfly is in pink foil too!  the super thin lines you see are some nail art tape i have and decided to try it to kinda from the sentiment.  I colored the images with copics after foiling.  someone said it would ruin the tip, but it did not mine.  I didnt like rub it real hard on the outline parts but I cannot tell a bit of difference!

And the minc machine does a whole better than a laminator, which is what I was using.  But I dont regret buying the Minc!  :D

Ok, that's all for now.  I think we might have a blog hop coming up soon, just for some of Claire's sets that we didnt showcase before, but thats not written in stone!  haha!

Have a wonderfully crafty week y'all!!

The Cast and Crew for Gina K Designs welcomes you to a special blog hop featuring the new Tiny Textures incentive stamp sets from the May StampTV Release Party! We hope to inspire you with some beautiful card projects as you hop along to each of the designer’s blogs!
Tiny Textures is a fun stamp set that allows you add a splash of something fun to your scrapbook pages or will help you to make a cool stamped background to your card projects. The “Just Because” sentiment from the set is ideal to add the finishing touch to a quick, but thoughtful card!
Enjoy the gorgeous inspiration samples from the team and then comment on each blog for your chance to win a $20 Gina K Designs gift certificate! To see who won, check the Big News Forum at StampTV a few day after the hop.

I have had so much fun with this little set!  Talk about possibilities with it!  I made a card last night to use for today, and here it is: 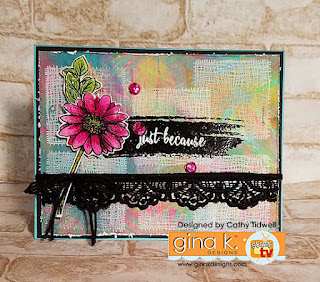 I also used a flower and leaf images from Melanie's newest set, Fill It With Flowers.  I created the background using a gelli printing plate and acrylic paints.  After drying, I stamped the the paint 'swoosh' with versamark and then added black embossing powder and heat embossed with it.  I did the same thing with the 'just because' except its in white.  When stamping on top of the black that was already heat embossed, of course it wanted to get some white in spots I didnt want, so just used a brush to sweep the strays away!!  :D  The flower and leaf stem were colored with copic markers/

Ok, thats all for now from me!
I will have some cards I showed at the release party at the bottom of this post too!


Ready for more awesome creations?! Just click on the links below for more from Gina and the Cast & Crew:
Gina K
Allie Gower
Beth Silaika
Cathy Tidwell
Claire Brennan
Donna Idlet
Karen Hightower
Kendra Wietstock
Melanie Muenchinger
Sheri Gilson
Susie Moore
Don’t forget to pop over to the Gina K Designs Store and check out all of the new products available this month in the “What’s New” section at http://www.ginakdesigns.com.


Thank you for stopping by! 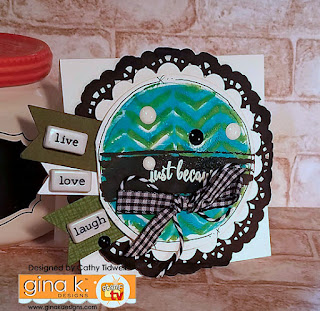 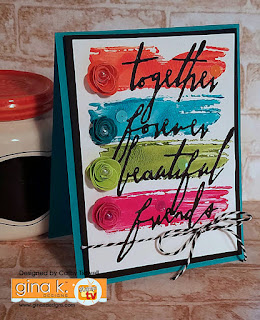 Affiliated links are used from time to time on my blog. There is no additional cost to you to use the links I provide. 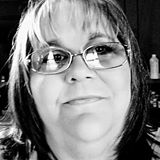